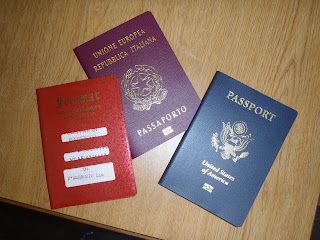 So, documents. Documents, documenti, documents. CHE PECCATO. What a pain! A few years ago before I turned 18 years old, my mother realized that it was possible for herself, myself and my brother to gain dual citizenship in Italy. It was a few years ago, so I don't quite remember the extent of the trouble she went through to get everything right, but I do know that by my 18th birthday I was apparently a dual citizen, but with no documents to prove it.

After being in Florence for a 10 week abroad experience and realizing Italy was where I needed to return to work and to learn more Italian, I also realized having documents to prove I was a citizen was a necessity. Over the summer after traveling to prague, budapest and croatia with alex and his friends, we returned to Muto to meet up with my parents. We had 10 days left in Italy, so 10 days was all we had to get my Carta d'Identita. Challenge accepted.

My mother went up to Fontechiari every other day, asking at the comune what paperwork was necessary to get Carta d'identita for all of us dual citizens. Half the time she went up, the women weren't in the office, and every other time they gave her new paperwork to fill out or told her something else was missing. Finally, they told her to obtain a passport photo and to bring me up to the comune so I can sign all the complete documents and make it official.

Getting the passport photo was quite the entertainment. We drove into Broccostella to go to the photographers store around noon time... silly us... why would he be there at noon? We walked up to the door only to see a sign taped up saying "sono al bar" (I'm at the bar)... and we thought... only in Italy would this happen. So, my mom, Toni and I walked down to the bar in search of the photographer. Lucky us, he was there! We spoke with the head carabineiri of Fontechiari (policeman), he offered us a coffee, and we politely declined because all we wanted was the photographer to return to his store. After about 10 minutes of chit chat, we got the photographer to leave and we walked back down the street with him to his shop to get our photographs taken. The process took about 20 minutes, I was impressed, and then we were off to the comune to sign the documents and get our Carta d'identitas squared away!

At the comune we met with the same women my mom had dealt with before. Strangely Nonno Michele appeared wandering the halls, when we thought we had left him at home, so humerous. The woman filling out the information for the carta d'identita asked us our height in centimenters (that was a struggle figuring it out), hair color, eye color etc. Then she made us sign our "full" names in 2 or 3 spaces. My mother and I clarified that I sign Lia Serafini D'Ambrosio, they agreed, so I signed away, my mom signed away and it appeared as though we were set. The woman at the Comune began to insert the card into the type writer to begin filling out the information (it was so old school), and we departed because it would take hours for her to use the type writer.

When my mom went back the next day to pick it up, we ran into an issue. Apparently my documents were unsatisfactory because I had signed my middle name. They just could not accept them! So I had to go back with my mother, resign the documents, and they had to make up a whole new identity card for me. Seriously, so annoying.

But by the end of the trip, I departed Italy with a Carta d'Identita, that looked as though it was a document used by Italians when the immigrated long long ago. Almost like one of the passports you use in the game Titanic, so old fashioned looking it seemed surreal.

Now, months having past, and having been given the opportunity to work in Rome, I needed to go after another set of documents. In order to work I would need an Italian Passport and a Codice Fiscale. This could be accomplished at the consulate in Boston, as my mom assured me all the paperwork was in order, all I needed to do was present myself because fingerprint scans were necessary to complete, so simple right? WRONG! Living at college in New York, attending class everyday made the process difficult because the Consulate's hours were Monday through Thursday 9-2, aka very accommodating to my schedule.

So the plan was for me to go home for a weekend to visit with Serena since she would be staying at my home, then to stay till monday morning, and miss both of my morning classes so that I could get all my documents over and done with. I called the consulate ahead of time just to make sure that I had all my documents in and that everything was set to go, so that I wouldn't waste a trip to Boston only to get denied my passport and codice fiscale because everything wasn't in order. So I called, giving the woman my name and confirming the steps I needed to take to finalize the process. The woman made me cry because she claimed I was not in the database and that it would take months for me to get the documents ready. So I called my mother freaking out that everything she said she had done wasn't actually complete, and that I'd never end up getting my documents and then never be able to work in Rome for the summer. She calmed me and made a call to the consulate herself and she said that the woman who talked to me was extremely sorry for freaking me out and that everything was set to go, I just needed to be present at the office on Monday to get my fingerprints and everything would be complete!

My time at the consulate was stressful that Monday morning. I was made to go to the back of the line because I was 4 minutes early for the time the building opened, so 6 or 7 other people got into the office before me, creating a line that I rightfully should have been at the head of. Nervous I wasn't going to make it back to New York in time for my Italian Class that I couldn't afford to miss again, I started mildly freaking out. But there wasn't anything I could do. We were staying in that consulate office until everything was complete, until I had a passport and a codice fiscale and nothing less. We were leaving there that day with everything done, and we weren't coming back!


Luckily, we were shortly called in to get our passports processed. We answered similar questions and filled out similar paperwork to that of which we had completed for the carta d'identita, and then we scanned each of our fingers into a machine. The passport was complete in a half hour, and it would be sent home by the end of the week! Awesome!

Then we went to the woman for the codice fiscale. A talker. We were making good time, but the next woman we dealt with kept answering the phone in the middle of filling out one tiny sheet, and going off on tangents, so it ended up taking way too long. However, she did manage to get me a living situation figured out for my summer in Rome if I had no other options. She calls up her son Andrea, right in front of us and tells him that there is this girl (me) who needs a place to stay in Rome for the summer. She tells us that he would be fine with it and that they live right near piazza venezia, and then she gave me his contact number so that I could live with him if that was what I wanted.

Excited at the new living opportunity and that I had completed all my documents, we drove on out of Boston, very happy with the morning's accomplishments, and so relieved to finally have all of the necessary documents for a dual citizen complete.