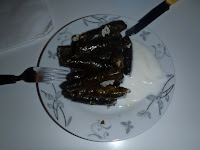 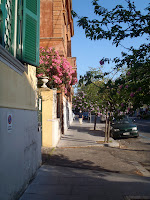 When I returned home wednesday I was very exited to have the grape leaves that Rehem was making for dinner.  I helped her prepare them as best as I could, and finally around 9:00, they were done cooking, and Rehem dished out 15 or 20 of them on to my plate. Nom nom nom.  She scooped a big spoon of vanilla yogurt along side of them and told me not to hesitate to take more.  She was going to eat hers in her room, while she watched a movie.  I skyped with mom while I ate the grape leaves, and when Rehem entered the kitchen for more, I told my mom to explain to her how she makes them at home, cause Rehem couldn't believe an American knew how to cook such things!  My mom and Rehem chatted for a little while on skype, and then we all went our own ways... me going to bed! Or at least I thought I was.

Benedetta returned around 10:00, and she went to see if there were any grape leaves left, so I went into the kitchen with her to socialize because I had heard other voices.  I sat down at the table and listened to Rehem, Marta, Laura and their friend Chiara chiachiono, chatting, them occasionally stopping to ask if I understood what was going on in the conversation.  After we went into Marta's room and hung out while Laura got ready to go out with Chiara, they were listening to arabic music and dancing, it was quite entertaining.  Finally around 11:30 I went back to my room to sleep, and Benedetta explained how she is very shy so she doesn't socialize that much with the other roommates, but she does now more because I just go out and sit there in the middle of their conversations to hear Italian, and she is more comfortable with me around cause I'm shy too!  So that made me feel better!  Benedetta opened up a little bit before we went to bed, told me about a boy she had met (hehe) and showed me some of her dance routine.  Yes... making friends! woot.  Anyways, by 12, I was out cold.

Thursday morning I woke up and headed to work, stopping at the same Bar I've been going to everyday.  The owner now sometimes makes small talk with me, and seriously the barista makes the best cappucino I have had aside from that at Sant'Eustachio.  Also, their cornetti integrali are buonissimo.  Their whole grain croissants are soooo good, and they have a really good apricot jam inside them... mmmm.

Work was relaxed all day.  Had a wonderfully long lunch and cafe afterwards. And all I did all day was verify coworkers expense sheets with the receipts they had provided. I love to organize.  Some of these people had their receipts stapled in the most orderly fashion, it was fantastic.  So I handled those all day, then left by 4:00 and then was home by 5:00.  The plan for the night was to meet Pedro (a friend from whom I'd met in Florence last year) in Piazza Navona at 8:30 and find a place to eat.  Since I was pooped, I napped from 5:00 until 7:00, got ready then walked to termini and a little ways down Via Nazionale, then took the 64 to Argentina.  I arrived at Argentina around 8, so I idled in La Feltrinelli looking for a book to read in Italian... I settled upon a Nicholas Sparks book, but didn't buy it because I wanted to find a second hand book shop somewhere that would be cheaper... then I went off to Piazza Navona to Piazza Navona to meet up with Pedro. 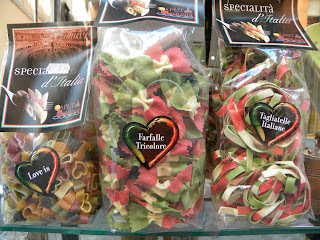 Once I found him out in front of the church in the middle of the Piazza we walked back toward Argentina and went to eat at a place called Rossopomodoro.  Wouldn't have been my first pick, but I let him choose since he should have known the area better than me.  I was surprised at how good I was conversing in Italian with him, it was easier knowing that he couldn't speak english (he is Brazilian), and that Italian wasn't his first language, so he too was making mistakes, and thankfully spoke a lot slower than the real italiani.  I struggled spitting sentences out a little bit, but overall the dinner was very useful in bettering my conversation skills.  For dinner I had fettucine with fava beans, artichokes, peas and a creamy cheesy sauce, and we had Falanghina to drink, which was actually rather delicious.  After dinner we went to get a birra peroni in Campo dei Fiore, watching the performers and the outrageous number of Americans floating around the piazza.  I was falling asleep by 11, so we went to back to Argentina where I caught the 62 to go back to Bologna, and I met a very nice brazilian couple on the bus who spoke english VERY well.  Conversing with them made the bus ride home a lot better, and the guy was very entertaining in explains their travels and their rental car experience.  He said he locked the keys in the car by accident and when he called Hertz they told him to break the window because the town he was in was too remote to get to.  So he asked someone in Greve in Chianti for a hammer and he proceeded to break the window and drive around in it until he got to Roma where he exchanged it for a CINQUE CENTO! (a new one though... lame).  He went on about his fun in his cinque cento but explained how much he missed his Jetta among other things back in San Paolo.  The couple was very interested in talking further, and as we parted ways walking down Via Ravenna, I felt as though my night had been completed by their sincerity.

All in all era una buona serata!