I woke up bright and early, 6:45 to be precise, to take a shower and prepare for my first day of work. 6:45 might have been a little early, but I was anxious, and rather hungry. I got out of bed silently, trying not to wake my roommate and went to the bathroom happy to see that the shower was of normal size, and had all normal controls. I took a shower, got dressed and ready to go, checked my email before heading out, then was out the door by 8:00 headed to find the metro 'Linea B' at 'Policlinico'. I think I took a couple of wrong turns, and nervous I wouldn't find it asked someone on the street if I was headed the right direction. I was! Sempre dritto, the woman said, so I walked straight ahead two blocks and found myself staring at the big red metro 'M' on the side of the road.

I took the metro getting off at Termini, two stops later, in hopes of finding a ticket place to get a monthly metro and bus pass. No luck finding the tickets, but I found a cafe to sit at and get a brioche con cioccolato ed un cappuccino for less than 2 euro total. I had forgotten how good real italian cappuccino are in comparison to one from Starbucks, not to mention like $5 cheaper! So I ate calmly because I knew I had plenty of time to make it to work...I wasn't going to be expected until around 9:45. I walked underground to the metro and waited with a million other people for the 'B' to arrive. The first train that came was so packed I didn't even bother trying to fit in, I had time to spare, and it just looked way too uncomfortable and impossible to squeeze another body into. The next train came 5 minutes later, once again pretty packed, but I was able to squeeze on and in between two americans. I soon found out they were brother and sister from Kansas City, the sister was at grad school for art history with Syracuse University in Florence and the brother was just there visiting, very cool. By the 3rd to last stop, the crowd on the bus began to thin and I was able to snag a seat. And by 8:55 I had arrived at Laurentina, too early!

Got off the metro and found a park bench outside to read on for a half hour, then I found the 776 bus to Via di Tor Pagnotta and I was on my way to Aircom International. I arrived at 10:00 and immediately got started practicing understanding really fast speaking italian. Francesca (my boss) spoke mainly to me in Italian and very quickly at that. She showed me a few of the basics after I signed a contract, then gave me a tour of the office and introduced me to a few other employees. Francesca explained many things to me, that I'm sure I only understood a brief summary of, and then we had a cafe' around 11:30 with two other employees.

Soon after Marc P. showed up! The guy I'd been needing to thank for my whole summer, and I didn't even realize he was supposed to be in the office! I was confused when someone named Marco introduced himself to me in english and then luckily it clicked and we got to talking about Union College, and finding a job that suits what your skills are and what you enjoy doing! It was very nice getting to speak in person with Marc and he gave a lot of good advice and his knowledge of italian is beautiful, so he gives me hope because he knew not a word before going to Italy. After Marc left more explaining was done and by 1:30 she gave me the okay to leave and I was out the door quickly to walk around Roma!

I took the bus to Laurentina and then the Metro B back to Circo Massimo, where LExi and I had been in March to try and get to Angela's apartment. Story: In march we were going to Angela's apartment in trastevere and she told us to get off at that stop and it was only a ten minute walk, but apparently I lead us the wrong way and a ten minute walk turned into a 50 minute sweaty hike with two huge suitcases and backpacks stuffed to the brim, along with a Lexi Bascom who need to use the bathroom the moment we stepped off the train... woops. So I humored myself by walking the right way into trastevere and low and behold, I was there in 10 minutes... Sorry Lex! 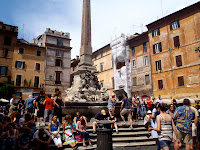 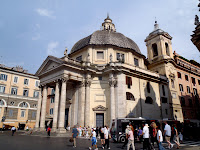 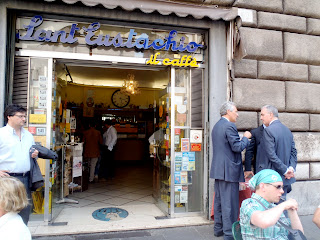 So I walked down the Circo Massimo to trastevere, did a little loop in and out of trastevere after crossing the walking bridge that takes you to the island with the hospital on it, that I somehow had never been on. Then I walked back across the river to Campo dei Fiori where they were just finishing cleaning up the days market. From there I crossed Via Vittorio Emmanuelle II and walked past Cafe Sant'Eustachio just to smell the coffee emanating from inside. From there I walked past the Pantheon, then headed to Via del Corso to pop in and out of some stores and ended up in Piazza del Popolo. Tired of walking, I got on the metro 'Linea A' there and took it to Termini where I went searching again to find a monthly bus pass. This time I was successful, although I think I could have gotten a student/resident pass for cheaper... then the plan was to walk back to the apartment from Termini to see how far the walk was, but the skies decided to open up and it began to rain, so I did my first trip with the bus pass up to Piazza Bologna. Piazza Bologna looked pretty even in the pouring rain, so I got excited about how close it was to Via Udine (my place) and about going to look at it the next day when it would be better weather. On the straight walk home from the metro I stopped in a store to buy shampoo, conditioner and soap, then I made it home swiftly to relax my legs.

On to day 2 of work!
Italian Life Roma