*Haven't had internet on my computer in a while so please excuse my late posting!*

Thursday at work I was messaging and BBM-ing Helena all day to figure out our plans for the night.  It’s funny how the midnight before your birthday can be so much more exciting than the actual day.  Friday, my birthday, I was just planning to go to dinner with some of the friends I’d made, and that would be plenty for me.  I felt bad that I wouldn’t be going back to Muto for my actual birthday, but I didn’t think there would be much to do, and I knew my new friends in Rome would be happy to celebrate with me (all though I would have liked to have a proper celebration with the nonni and my parents as well).  Anyways, so Helena and I were scheming plans for the night while we were supposed to be working, and we decided we would bring wine to Piazza Trilussa (the main steps in Trastevere), hang out there for a while, then head on over to Aperitivo on the isola, and then return to the steps if it was too early to go out out, hang out and have a grand ole time.  Plan set.
Plan changed…
Kate a friend I had met earlier had 1 day left in Rome before she returned home, and she wanted to go get a Tiramisu at a bar that a friend had raved to her about and she had asked me to go with her, so our plans shifted slightly.  I would meet Kate at Cade Dovelu on Via Nazionale at 8:00.  Helena would try and get there by 8:30. Then we would meet Cornelius at N’importe Quoi at 9:00, then we would go to the steps all together and then to the Isola for aperitivo and resume the plan, just all a little bit later. 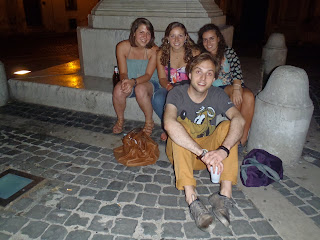 So after work I hurried home to get ready to go out. Showered and got dressed, then went to find a shopping bag to carry the 4 beers I had in the fridge. Helena said she would bring a bottle of wine, and I said I would bring some beer, for all of us were sick of paying 8 euro for one drink. Surely supermarket beer and wine was better and cheaper… anyways I met Kate at 8. Rhyme! And we went to sit down inside the café, and we ordered ourselves Tiramisu.  We sat and enjoyed the delicious treat, and chatted for a while.  Kate had been given the opportunity to go nanny for an Italian family during their 2 week sailboat vacation through Croatia, but her work wouldn’t allow her to take anymore time off, so she unfortunately had to return to the states the day she had planned when she made her tickers… Saturday morning.  Since it was going to be her last opportunity to go out in Rome I convinced her to come out with us instead of going home.  With some convincing she agreed, but needed to go home and drop her things off and get changed to go out, and then she would meet us at the Isola.  Nearing 9:00, Helena had already called and said she would meet at N’importe quoi because she didn’t want Cornelius waiting for us, we’ve all turned into horrible Italian time tables, LATE LATE LATE!  Kate and I got espresso pick me ups before paying and leaving.  We took a bus to Argentina, then took the Tram across the river where I got off, leaving Kate on the tram going back to her house near Marconi to get changed and ready to go out! 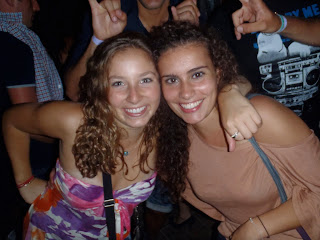