August 04, 2011
Monday I woke up and went to work as usual.  At this point Rihem was back in Israel and Marta and Laura were still in Spain, so I had the whole apartment to myself.  Not gonna lie. I love being alone in my own living space, so I was excited to have the entire place to myself to cook, clean, shower, sing etc.whenever I wanted. L'unica cosa che mi ha mancato era conversazione italiana. The only thing I missed about my roommates was having people to engage in Italian conversation to help better my language, but I guess I can't have it all... so I settled on talking to myself in Italian! 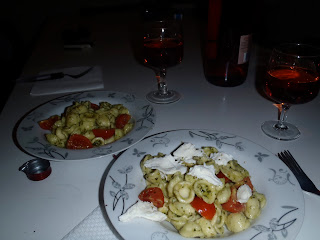 Anyways since I had the place to myself I invited Helena over for dinner!  After work I went to the SMA at Piazza Bologna and bought my weekly spese. Stuff for lunch, yogurts, fruit and salad, and then I bought fresh orechiette, pesto, mozzarella and tomatoes for dinner with Helena.  She was going to bring the wine! Excited for our little dinner party and my first house guest, I hurried home to put everything in the fridge then did some quick cleaning up of the place then sat down to watch harry potter on my computer while I waited for Helena. Clock ticked near 8:30 and I figured she was lost, since she said she'd get there before 8, so I turned on the water and waited for her to call.  When she called the water was almost boiling, so I went to go find her outside, and then we were able to throw the pasta in right when we got back to the apartment.  We made a beautiful pasta with pesto, tomatoes and mozzarella, and enjoyed our wine.  No one else seemed to be going out, so we milked the food and the wine, had a nice and relaxed evening full of good food, good drink and good fun, and I got to go to bed at a reasonable hour! Score!

Tuesday... I don't think I did much tuesday during the day. Oh wait yes. After work I somehow tried to go speed shopping for 45 minutes down the corso, obviously came out empty handed, and rushed back home to get ready for dinner at our Chit Chat Italian group leader's house, Nunzio.  I hurried back, stopping at Mizzica to get a small plate of pastries to bring to his house, quickly changed at home, rested for like 15 minutes, then went to meet Sophie, Danielle and Sarah at Termini.  I arrived at 7:48 and immediately found Sarah and Sophie outside of the Nike store (our meeting point).  Sophie hadn't had time to get anything to bring to Nunzio's so I waited outside the Nike store in case Danielle showed up, and Sarah and Sophie went off to find a supermarket and some wine to bring to the dinner party.

Once Danielle showed up she ran to get a coffee because she was distrutta. Then we walked to Via Nazionale to find bus #60 express, to take up Via Nomentana, somewhere far off our maps, and to Nunzio's apartment. 20 minutes later, 1 stop before the capolinea, we got off on Via Nomentana at Romognoli... we started to walk in the direction the bus had been headed, then realized that we couldn't be going away because we were headed to cross a large main road that Nunzio never mentioned when describing how to get to his house. So we headed the other direction, I stopped to ask a boy if we were going the right way and he said dovrebbe essere la prossima alla sinistra.  It should be the next road on the left, so we walked along, and we were thankful to see it was! Now to find his apartment...  He said it should be obvious, number 35, on the second street corner, but every number building also had an A and a B and just plain old 35 seemed to be hiding from us, then we thought we found it and scanned the name tags on the door, but no Nunzio.  2 minutes later we realized we were at building 37, so we abandoned that porch and went back to find 35 whose street number was hiding. Soon after we located Nunzio's buzzer and we began buzzing... No answer... We waited outside hitting the buzzer repeatedly for 2 or 3 minutes until another woman who lived in the building returned home and we followed her through the gate.  Once inside the gate we rang the buzzer for Nunzio on the inside again, and finally we heard a response.  He buzzed us in the door that was already up, and we got into the elevator and rode it to the top floor. 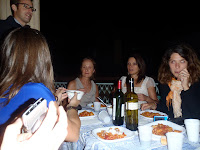 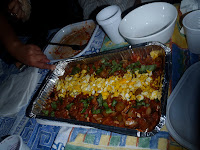 He welcomed us into his apartment, and we all did the kiss cheek greeting and looked around his place.  All walls of the place were covered floor to ceiling with bookshelves and packed with books.  He also had the same green Ikea chair that I have in my dorm room plopped in the middle of the floor.  He took us through the kitchen, us wondering if we were the first people there (20 minutes late), and we went out on the balcony and found 4 or 5 other members of our chit chat group already sipping red wine.  The view was spectacular. You couldn't see the domes of Roma because we were so far away, but you could see the hill towns that surrounded the city, and the town of Frascati plopped upon the hill directly to the left from where we sat.  The porch wrapped around two sides of the building and it was more than spacious enough for the 14 of us who showed up. 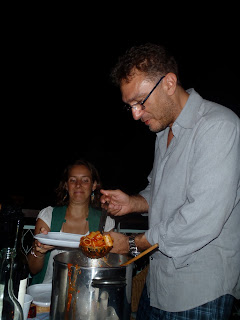 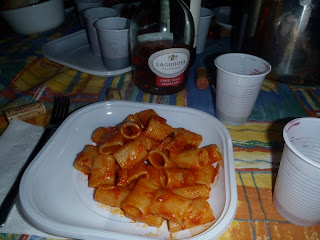 We sat outside and chatted around a few bottles of wine and some tiny ciambelle crackers and hunks of pecorino cheese while Nunzio was in the kitchen preparing his Amatriciana.  We all offered our help, but he insisted he was all set in the kitchen part, the only thing we could help with was opening the next bottle of wine ;) Around 9:00 we began to set the table, and we moved from out circle of chairs to sit at the table set with fine plasticware!  We continued chatting, Nunzio scolding us whenever he appeared from the kitchen and heard English being spoken, and then finally around 9:30, Nunzio arrived with the big shinning pot of rigatoni all'amatriciana!  He dished out generous loads to everyone, we toasted and then we ate! I've honestly never had an amatriciana as good as Nunzios. I tried to eat it slowly as to not scare people off, but I realized everyone else was ravenous with their plates of rigatoni, so my pace seemed turtle like compared to the others. We were given a small second portion if we wanted more (of course I took it), and then Nunzio went back in the kitchen to prepare the secondi! Carmela, a british woman had prepared a dish for the secondi, so he arrived from the kitchen with her meat option, and then came with bowl of prepared carrots for the vegetarian crowd that he had seasoned and cooked.  Best carrots I've ever had!  After the secondi there was no shutting us up. It was amazing how chatty we could all be with only having met each other 2 or 3 times before.

Around 11:00 dessert was pulled out of the kitchen.  All of the guests had either brought wine or a dolci so there were plenty of sweets to go around.  There were to chocolate torta both of different consistencies and both superb.  There were the pastries I brought from Mizzica, then at least two other little trays of dolci that people had brought.  By midnight I was in a food coma, and once again I found myself thinking to myself... these are the people, the conversations, the food, that make Italy so attractive to me.  And I know not everyone was Italian, actually Nunzio was the only Italian, but everyone who attended had something in common, a love for Italy and a love for the language.

A group of us left at 12 afraid we wouldn't be able to make it home without making the last bus, and frankly we couldn't eat or drink ONE LAST THING! Le nostro pancie erano PIENO PIENOOOOOO!

Can't remember what I did wednesday. Probably met up with Helena quickly and walked around trastevere, but I know I didn't do much because I was resting up for Thursday night and Friday! COMPLEANNO MIO!
Pensieri