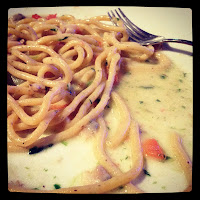 After nearly a month and a half, I'm finally beginning to settle in Bologna as a vera bolognese.  Still struggling with some aspects of life here... just to name a few: the language, making friends, understanding classes, how the buses work, what books on the course websites are necessary to buy, when exams are taken, when the second term restarts etc.  While these are some aspects of la vita italiana I still need to get a grasp on, there are many things I've successfully accomplished.

First off, I'm not homeless.  With the apartment searching process I made headway and had many firsts in a number of areas. I signed a contract (in Italian), paid rent, sent a money transfer with an Italian bank, established how to mail things to myself, paid registration taxes, determined how to work an Italian washing machine and many more...  I also learned the hard way how to pick/find a roommate, and that I'm not quite ready to live with boys yet. Yuck. No matter how clean a boy claims to be, I swear, they are still dirty. Hair and all... haha!

In aspects of University life, I've determined a few things as well.  Universita di Bologna was a good choice because it probably is the Italian system/campus closest to that of the American system (still not very close though!)  Classes are pleasantly smaller than I had imagined a university of 100,000 students to have.  I do have to attend class everyday in order to succeed, as we are only 20-40 students in each class, and I have opted to take the courses frequentati. Meaning I've opted to actually attend the lessons, and this option has different lessons/books to follow than for those non frequentati who don't come to lesson everyday. 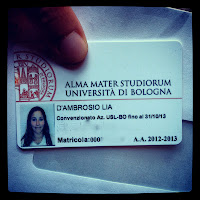 I learned that education in Italy is a right.  Meaning that you don't have to be enrolled at the school unless you wish to take exams and receive a grade.  That deadline for registration is November 30th, two months after the first classes start.  No matter who you are, you are allowed to pick any class offered and attend it if you so wish.  The only catch is, if you want to go to the bathroom you need a student ID, hence why I wanted to get my enrollment completed as quickly as possible!  So, I learned with the special segreteria was, where foreign students had to bring their documents in order to receive their badge.  The struggle here was that similar to the consulate in New York, their hours were rather constricting; 9:15-11:15 monday, wednesday, friday, 2:00-3:30, tuesday thursday! Luckily, I forced Brenna and Priscilla to come with me on the Friday morning they were here and I had no class, and I somehow successfully brought all of the right documents with me: copies of my carta d'indentita, dichiarazione di valore, a receipt of my paid tuition and a passport photo. They then told me I would be called with in a few days when my badge was ready to be picked up! So that was successful, at the time... obviously a few days pass and I hear no response from the segreteria delle scienze politiche, so I contact them, and they tell me I need my permesso di soggiorno.  Were they ever going to tell me that this wasn't included so that I could bring back the proper documents? Probably not! So luckily I contacted them, and set them straight, I didn't need a permesso di soggiorno because I was an Italian citizen, so no Visa was necessary. The same day they realized their mistake, and to my surprise, they said I could come pick up my badge whenever I had time, it was ready! And I could officially use the bathrooms on campus whenever I wanted!  I also was given the lovely permission to pick out my classes officially online, and a host of other special privileges in regards to the University resources! Wahoo!


I've also learned some of the typical North vs South myths are true. Up North the food is much heavier, red meat is much more common, and tortellini (tiny, small, medium, large and XL) is the Bologna thanggg. The myth that people are much colder up north has proven true.  In southern Italy, upon meeting someone new, almost always is it right and polite to kiss each other on both cheeks. Since my time in Bologna, I've shared this experience with maybe 2 people, and I rarely see good friends stop to do it when they see each other at school or walking down the street.  In southern Italy everywhere you look you can probably see someone greeting another person in this fashion, I miss that. 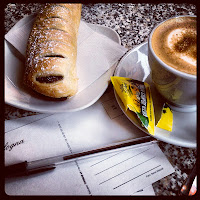 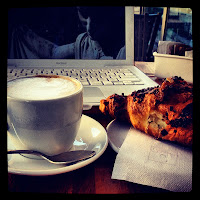 One thing that I have mastered in Bologna is the Italian colazione.  Breakfast here is much different than in the US, and often I find myself craving an omelette from West Dining hall, or homemade pancakes with banana and chocolate chips at Lenox road, but since I can't have these, I settle for the Italian style breakfast at ALL hours of the day.  Cappuccino and brioche.  Up north we call the croissants brioche instead of cornetto, so instead of my Roma order cappuccino e cornetto integrale, I've converted to cappuccio (they abbreviate) e brioche con cioccolato :)  So as for experiencing Bologna, it is safe to say I have the area of gastronomia completely covered.

On another note, I've decided I will definitely have a puppy one day.  Brenna and Priscilla can attest to the next statement. The homeless people of Europe, and Bologna have THE cutest dogs in the world.  So this is a moral debacle I often walk past, man with dog and sign saying "We are hungry, abbiamo fame".

And one fight that I'd like to pick with the city of Bologna is WHERE THE HECK ARE ALL THE FIAT500s???  In Rome, on every street, on every corner, on any given day you will see at LEAST one cinquecento.  But in Bologna, I swear there are maybe 10 out of a city of 400,000 people.  I'm starting to wonder if FIAT did a promotion to trade in old Fiat 500s for the new spiffy ones, and if that's true, I'm about to pick a fight.

Have I told you how classes in Italian are hard?  Well they are. I sometimes wonder why I chose to come to a master program in a foreign language, I must be crazy.  Every day gets a little bit easier, but it's still nearly impossible for me to follow taking notes.  The biggest thing is that I understand words and sentences, and could translate them, but it goes to quickly for me to understand the political concepts and theories behind the words and sentences... for this reason I might have failed my prova intercorso this morning... so I hope it went better than I think!

I still have a whole weekend in Rome to recount, and I leave for Paris on Wednesday, so there are more posts to come, but I'll leave it at that for now! Alla prossima!
Italian Life Travel