December 19, 2012
Bicycles. I love riding bicycles. Easy way of transportation. Great exercise. Just plain fun. And bicycles are beautiful. Bicycles may be my favorite subject to photograph ya know?

So what is so unique about bicycles in Bologna. Everything, I think. Of all the Italian cities I've visited, I first thought Firenze was filled with bicycles.  There are few bicycles in Roma, its impossible to travel Venezia in bici, Napoli? I'm sure a bicycle can't survive in Napoli.

Bicycles make me nervous in Bologna. The first day I swore I would buy a bike to travel the city with more ease.  Then, every day I realize that bicycles are dangerous! It's scary to ride a bicycle amongst the crazy italian rules of the road, and against the every changing cobblestone terrain. Come riusciro' senza incidento? Non riuscero' mai!

Every day I watch the bicycle culture.  A father answers his cell phone while riding down Via Garibaldi without a helmet. Child seated behind him. Cars buzzing by.  I wonder to myself how on earth this is possible. Then I'm pleasantly surprised that he makes an effort to end the conversation quickly because he has un bimbo a bordo.

In other cases its raining.  Everyone bikes one handed.  Umbrella in another hand.  It's taken me years to practice riding single handedly, and without hands is another feat of mine that has taken much practice.  So, theoretically, it shouldn't surprise me as the woman riding the bicycle with one hand attached to an umbrella proceeds to answer her cell phone with her other free hand.  How has she not been hit by a car? Beats me! 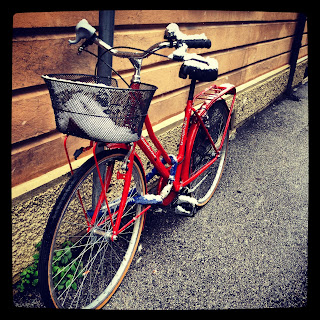 One more thing about Bologna Bicycles is they are difficult to come by. My first week here I went to every shop in town trying to find a used bike.  Even if I had the money to buy a new bicycle, new bicycles aren't permitted in Bologna. Why? There is this sort of a black market for bicycles that is well known among the bolognese.  Everyone warns you when you buy a bicycle, make sure you buy the shittiest bicycle there is. If you don't, 75% of the time, the bicycle you bought will be stolen back from you and resold in the same place. It's often necessary to use at least 2 chains when locking your bicycle up, and it's to be expected that your bicycle gets stolen at least once in your time spent in the lovely city. Gotta love Bologna ;)  Avviso: Non comprate bicicletti in Via Zamboni! ha! You'll see why!

Anyways, In conclusion. Queste bolognese. They are spectacular with a bicycle. My clumsy biking talents will never amount to theirs, so I'm stuck with the question... To buy a bicycle this spring, or to not buy a bicycle? A bicycle could mean danger, but it could also be a door to a new culture, the key to the elite city bikers club of Bologna. Sounds nifty right?
Italian Life