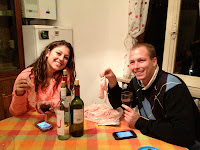 So after a complete first semester of classes, traveling all over Europe and meeting my American friends and family in any place possible, it came the time to cool down the fun and turn over to exam period.  I spent my last weekend of freedom gallivanting with Brian and Sonia.  We did Florence, Bologna and Rome together, enjoyed a few drinks together, and saw some of the oldest stuff in history together, we also did lots of catching up, and generally had a grand old time.  However, their parting from Italy signified that I needed to start studying for my first oral exam I would endure. 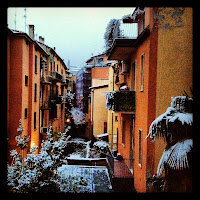 I returned from Rome February 11th, a Tuesday afternoon, from then I would have 7 full days to study for my exam held the following Tuesday the 18th.  It seemed like it was plausible to learn so much in 7 days, but then I realized the differences between Italian University and American University.  At Union, every day I was expected to have prepared something for class, whether it was reading, writing a paper, or taking an exam.  Contrasting this type of learning, the only thing I had done during the semester was attend class.  And did I mention, I was attending Master Degree courses, in a foreign language, and in a subject I had never learned before?? I HAD to be crazy!

At this point I thought I had understood basic concepts, I had read through the entire book and the additional articles required for the class, yet I was entirely unaware of the kind of knowledge necessary to acquire to receive a high grade in an Oral exam.  Studying with my friend Lina one afternoon proved to me that I knew nothing of the technique of how to study for an oral exam. You must be able to describe every term and concept and in a fluid way. You have to be prepared for follow up question, or prepared for a complete change in discourse.  All I knew was that I would struggle to explain Law of European Policies in English, and doing the same in Italian would be a whole other endeavor. cazzo. 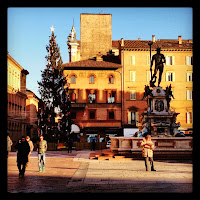 After studying with Lina I realized I had a lot more to study than I had thought.  She outlined the topics that would be covered and explained some themes I found confusing which was very helpful, but still I wasn't near the level of proficiency that I was supposed to be at. I studied all weekend, taking one break to go out with Tori and the other americani  on their last Saturday in Bologna, it was worth the study break, and then I was back to the grind! Tuesday morning before the exam I met with Lina to review.  We went over everything and I was able to explain all of it, more or less... and I was feeling confident for the 3:30 exam.

However, everything quickly went to shit when I walked into the office and was first questioned by my professors assistant who had taught two of our lessons for her doctorate work. People always had said the assistants were the meanest, I hadn't believed them until that day... This girl/woman literally brought me to tears, she was ruthless, and comletely not understanding of my lack of Italian proficiency.  She asked the most specific questions on themes that were only briefly touched upon in class and she was a real bitch about it! Even Lina agreed her line of questioning was absurd and she sometimes didn't  know what answers she was looking to hear (and Lina is a genius, I swear). Luckily, La Endrici (my professor) was much nicer.  She explained to me her assistant said I was insufficient, but that she would be willing to hear me talk.  She asked me a question, turned to me and said turn around and take a minute to think about it... while I did (not many answers came to my head haha) she was telling her assistant it was okay for her leave while she finished testing me... grazie dio! She knew her assistant was cruel, and didn't want her present for the rest of my exam which I successfully struggled through, and La Endrici gave me an 18, crossed it out after I begged to describe another policy, and graciously gave me a final grade of 20.  18 was a passing grade and man oh man was I so happy and distraught at the same time.  I thanked La Endrici, left the office where my classmates were and starting balling because of the stress.  I hated EVERY SECOND of that exam, it was TORTURE!!

Luckily, my classmates could all recall their first oral exam at University and they were so nice to make me feel better, I was so happy to have passed and to have been with these great people! Lina and I made it.... she Aced her exam, Alonso passed as well and we were all very content to have on exam out of the way.  So happy that Lina and I headed to the Osteria del Sole to munch on potato chips and get a little drunk off of a bottle of pignoletto frizzante (my favorite!)  The rest of the week was free sailing for me. I got all of my things packed up, finished my Christmas shopping, started to write some of my Ricciardi paper and I took in the sight of Bologna at Christmas time. Sunday I was back in the states for almost a month of relaxation, visiting with friends and family, and then January 25th, I was right back into the fear of conquering another Oral exam.  This time I knew to speak out loud to myself when studying, and study with others when possible, and lucky for me, my second exam went well and I defied BALDINI and passed the class that all of the foreigners and a number of Italians dropped out of in fear of failing.  I couldn't have been more happy!

The final strange thing about the oral exam is that you still have to "verbalize" your grade. Technically the exam I took in december was a pre-exam date so the system for entering grades was not up.  So La Endrici gave me a white piece of paper with my grade and topics we talked about, that I would have to return to her on the date of the verbalization of the grade (Jan 30).  For a paper I wrote for Ricciardi I had to do the same thing, show up at the time of an exam and watch him put the grade into the system.  It's a very strange concept, and very interesting because our English teacher verbalized our grades for us with out us having to return to do it in person (more efficient!). So without this verbalization I could have already been skiing in the Alps with Suzanne! But I had to be present today, so now I'm off to ski and enjoy the French Alps! A dopo!