Back in Bologna for nearly three days, in the midst of preparing for my final exam, and the offer arrives to take a day trip somewhere. Naturally, I put the studying on hold, gave a big F you to the continuous rain, and headed off with an american friend Samantha to explore the city of Mantova.  With six months left in Bologna, there's already no time to second guess 'living'. I am doing it.  I'm no longer counting calories or nickels and dimes (well for the most part), and I have proclaimed that this semester is for graduating on time but also for living it up, enjoying life and doing as many new things as possible and seeing all the sights I have not yet seen.  Samantha, also unsure of how long Italy will remain her home is experiencing similar urges, so I was thankful when I received her message asking if I would be interested in a day trip, because I had already been planning to escape saturday or sunday to explore some town in Emilia Romagna, so I jumped at the chance to go to Mantova on friday with a companion. Score!

Ready to take on whatever weather the day brought us, we were off to Bologna Centrale by 7:45am and attrezzate.  We were already excited because it had been non stop raining since I arrived Tuesday, and it seemed like the sky just wanted to be very grey and stay that way without spitting at us.  It was a good start to the day!  On the train to Mantova, we used our 3G to wikipedia the town to determine what would be the main sites to see, the cultural highlights and of course, the culinary musts.  As you would expect, we spent most of our gigs browsing the various regional delicacies that Mantova would offer us, from the wikipedia page, we had a lot of ground to cover in terms of consuming calories in just six hours.

We arrived at the train station fortunate to see it had not begun to rain.  We got on our bearings and headed toward the center to find the Tourist office to get a map and advice on the city.  Walking into the center of town we were obviously quickly sidetracked as we walked past the "Casa del Pane", situated on a perfect corner and immediately calling our name. In fact, we soon realized that "Casa del Pane" was reviewed as the best bakery in Mantova by a reviewer on TripAdvisor, it was like it was meant to be that we took that road toward the center, and there was no way we could say no to the various pastries staring at us from their shelves, labelled with the various typical names that we had just learned about on Wikipedia.  The only question for us was, which treats to get?  We entered the bakery, and were quickly greeted by the nice men running the shop, they chatted with us, while we told them we wanted to try the typical mantovana dolce, they suggested some sort of rum cake which we quietly nixed, and we asked about the Sbrisolona Torta which we had read about on wikipedia.  The men agreed it was a very typical pastry of the area, so we grabbed a slice of that, and our eyes had also been caught on a frittella di mele con marscarpone e gocce di cioccolato, even if it wasn't a regional pastry, we couldn't resist... a fried apple flavored sugar coated dough ball filled with delicious marscarpone and chocolate chips. Yes, please.  We left the "Casa del Pane" enthused, pronta to eat our frittelle which they had heated up for us, and we decided to save the sbrisolona cake - which literally means "to crumble".

Quick Sbrisolona History: The Torta Sbrisolona di Mantova is the most well renown dessert of Mantova and the most diffused outside of the province. It used to be called the "tart of three cups" because it was made from a cup of cornmeal, a cup of flour and a cup of sugar. Often the tart also has almonds in it. The dessert derives it's current name from the verb sbriciolarsi, which means to crumbled and it is also advised to be eaten by breaking off pieces with your hands, never to be cut with a knife.

Frittelle in mano, only for a split second anyways, we headed toward the center feeling in heaven as we bit into our little fried dough balls of deliciousness. And we immediately regret not buying more. We stopped into the Basilica of Saint Andrea before reaching the tourist office. We admired the intricate detail of the enormous church, spent our time walking around every corner of the church, then continued on.  In the tourist office we were given a map, Samantha asked nicely for some suggestions for the city and the other obvious question, where to eat! On our agenda we had a couple of more churches to see, the Palazzo Ducale, Palazzo Te, the lake, Virgil and more to eat, so off wandering we went.

Before we stopped for lunch, we wandered through the Palazzo Ducale and the attached castle that unfortunately was closed. We spent a good amount of time in the Cathedral or Duomo of the city where we admired a painting of Saint Agatha, and learned about her sainthood and why she is the patron saint of breast cancer (Thank you 3G yet again). We saw the house of Rigoletto, strolled through the park dedicated to Virgil (It was sadly very vandalized), and then strolled along the lake around the peninsula that is the city of Mantova and headed back toward the center with hungry stomachs. 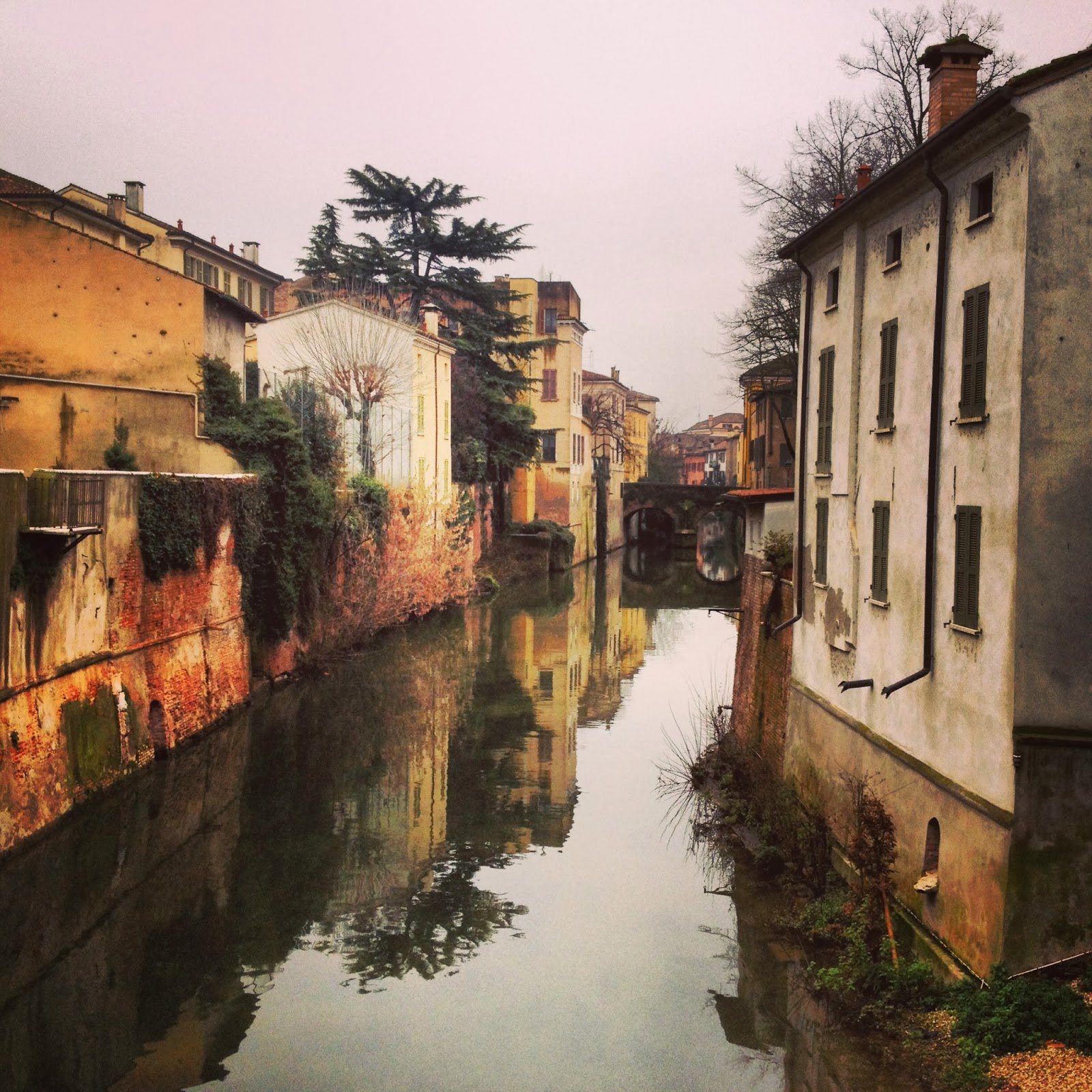 We had two restaurant recommendations from the woman in the tourist office, so the plan was to check them out and find the better of the two.  On our way to restaurant number one we walked past another bakery whose window was taunting me with another Mantovan specialty, la torta di tagliatelle, naturally I couldn't just ignore the window, so I bought myself another little snack for the train ride home :) Afterwards, the first restaurant (Taverna Cinquecento) we walked to seemed actually quite nice and decently priced, 10-12 euro primi, but we noticed they did not have much of the local cuisine as options on the menu, so we went off hunting for the second restaurant which ended up being a hit! Trattoria Al Portichetto was exactly what we were looking for and we were so thankful that the tourist office had recommended it. Not only did it normally have really cheap primi and secondi 6-10 euro, but during lunch time they had a lunch menu including a primi, acqua and caffe for 7 euro. Score! Samantha went for the Capunsei, which are "gnocchi di pane" or gnocchi made from usually stale bread and dressed with butter and sage or in brodo (chicken broth), and were typically made during and after World War II by the poor, but then became popular in restaurants.  I, on the other hand, had Risotto alla Pilotta, which is the most famous risotto of Mantova, named after the people who worked in the "pila" of rice, the dish contains plain risotto with grana and pesto di maiale (pork).  All in all, no complaints for our 7 euro fabulous lunch and with our bellies satisfied we were off to explore the parts of the city we hadn't walked to before and also make it to the Palazzo Te. 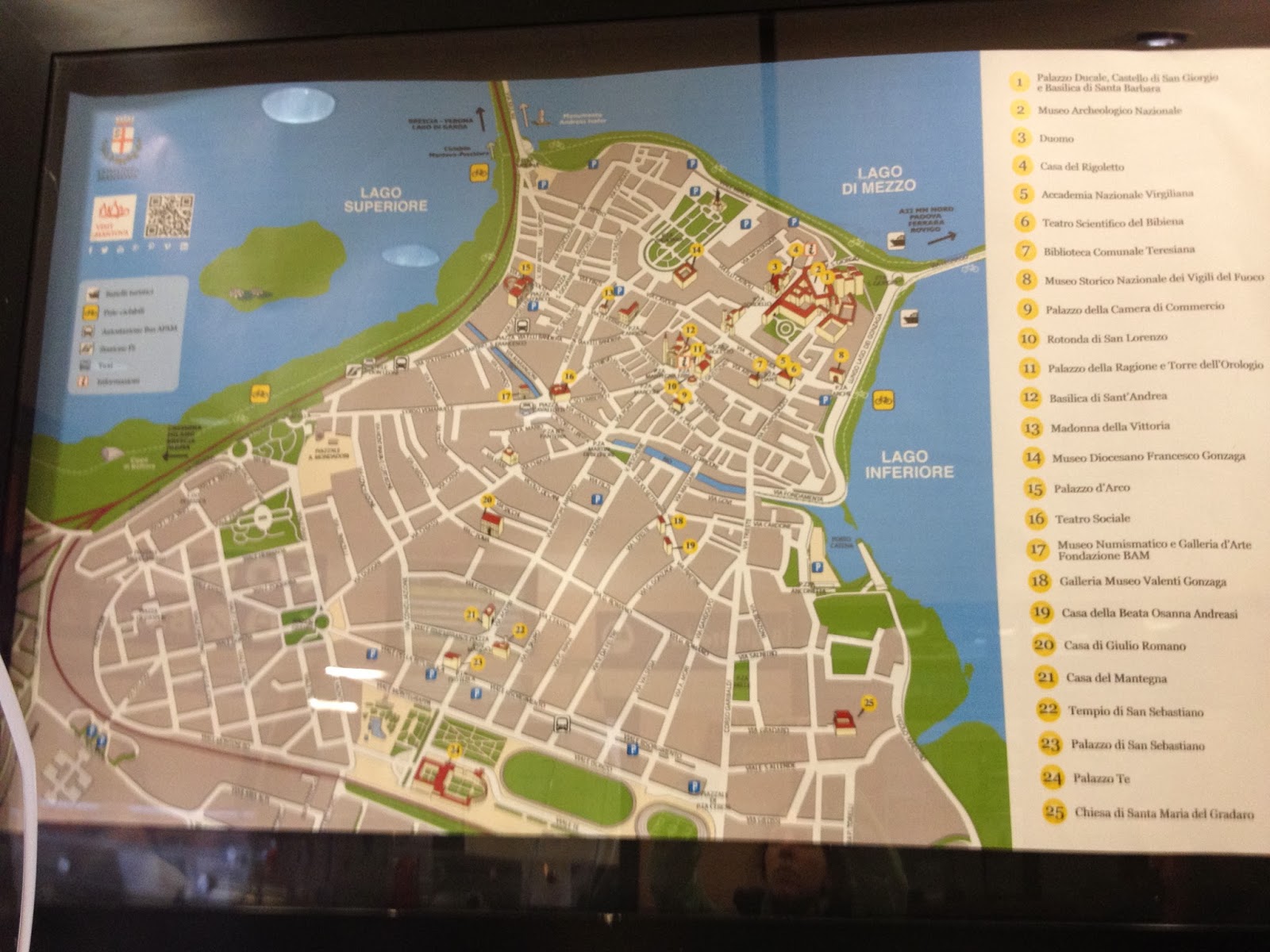 Needless to say, we had a pretty successful day trip to Mantova.  It never ended up raining, and we nearly checked off every food on the wikipedia culinary list specific to Mantova.  We saw gorgeous churches, and the intricate details of each room in the Palazzo Te, and we had the Sbrisolona to cheer us up on the utterly cold, long and late train ride home to Bologna :) As for my Torta di Tagliatelle, I resisted eating it that same night and enjoyed it the following morning with a nice cappuccino in the comfort of my home.  The Torta di Tagliatelle was appunto interesting, it had a very eggy base to the dough, and the tagliatelle on top with almonds mixed with some sweet/herb taste attributed to Sassolino liquore (Anice flavor) made it a kind of dessert I had never tasted before.  It was certainly something to try! By the end of the day we were frozen and mad at trenitalia for constantly running late, but at least our tummies were lined with the delicious treats of Mantova!