July 17, 2014
So the other day I had to mail a letter and did not have any stamps, nor did I know how much a stamp was going to cost, so I had to make the unfortunate trip to the ITALIAN POST OFFICE. This may not seem like the worst thing that could happen to a foreigner living in Italy, but it is among Italy's top 10 most annoying day to day errands, and that is without a doubt a fact.

When I arrived at the post office to mail a single letter I was confronted with the machine that gives you a number. Now this I expected because it wasn't my first time in a post office, and this time I was nearly positive I would pick the right number. To give you some background, Italian post offices work like a meat counter in the supermarket. You enter, you pick a number, you wait till your number is shown at a counter, you get your transaction done, then your out.  Sounds overly simple right? WRONG.

The number generated has six different choices for different types of transactions you are making. The post office in Italy is a versatile institution, surprisingly used not only to mail letters and packages and sell stamps, but it is also a place where you can get a phone plan, play your electricity, gas, water, internet and telephone bills, you can even use the post office as your bank account and do a number of various financial transactions all within the confines of the post office.  Seems efficient... But is it really? The buttons on the ticket generator are codified with a letter representing a specific kind of transaction. They seem rather self explanatory with the list of possible transactions listed below each letter, but somehow I always choose the wrong letter and end up having to try again after waiting in the wrong line forever. Could be due to lack of post office vocabulary as well, but to be honest, I notice Italians struggling over the button decision as well!

At this point this wasn't my first time mailing a letter so I was rather certain P was the button I needed to press. I was correct, and was actually really excited because for once it seemed like I would be helped rather quickly.  They were on P158 and I had P167, so that didn't seem like to bad of a wait, or did it? I had arrived at the post office just before 1, and was hoping to be in and out quick enough so I would have time to eat lunch at home and get back to uni in time for a 3:00pm class. Seemed totally doable because only 9 people before me had to send packages, that could happen a minute per packed, and Lia is out of the post office in 10 minutes.  HAHAHAHAHA. YA RIGHT.

I am thinking I this transaction is going to go smoothly until 5 minutes later they are still helping the same 4 customers they were when I showed up. 6 minutes later, a transaction ends and a number change occurs, we're on to customer P159. That happens quickly and we are onto P160, oh wait fake out, someone brings the woman working the counter a pastry box and she stops business to eat a pastry. Another man working the counter finishes his customer and moves swiftly to P160, and his neighbor simultaneously finishes with their customer and instead of advancing to the next decides that it's his time for lunch break. Workers are coming in and out, pausing when they want, and deciding to go on lunch break while there is still a full room of customers. P160 finishes and magically we proceded through three numbers swiftly and came to pause at P163.  I was sure the numbers would go to P190 before lunch could be taken by all, it was packed. That's when I realized that the first counter hadn't moved on to the next customer and I had been in line for nearly 15 minutes, that's when I looked up to see what his P number was and it was P124. They were helping P124 and P163 simultaneously. Holy s***.  What on earth could they have been doing at that counter for so long? How many hours had P124 (an old man) been arguing/getting things done at the counter? I just couldn't imagine what was going on there. 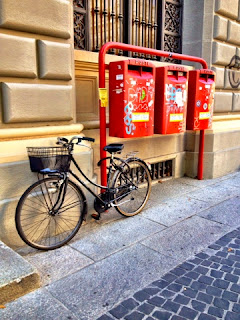 Luckily the woman finishes being golosa and puts her pastry to the side and continues to help the next customer. By 1:25 I was two away from being helped and lunch was in my future.  Finally P167 flipped up on the number scrreen and I went to get my transaction done at counter number 3, P124 still arguing next to me at counter number 2. I asked to send my letter to the United States, he said 2 euro, I handed him 2 euro, transaction was complete, I was out of there by 1:27, and I was pissed because I could've just bought the standard two euro stamp in any tabacchi, but I had assumed a letter would cost more than a postcard so convinced myself the post office trip was necessary, but now I know!

Lessons learned:
1. Avoid the post office at all costs.
2. Efficiency is rare.
3. Take a ticket for all options on the number machine to avoid being sent back to the end of the line.
4. Stamps are expensive.
5. If you absolutely HAVE to go to the post office, do not go near lunch time.