Have you ever heard of la Pietra di Bismantova!? I certainly hadn't, and even once I had heard of it, I still was unsure what I was about to embark on when I agreed to go hike it with a couple of my classmates. But I am sure glad I said "yes! I'll come!" when they asked :)

The beginning of June marked the end of the first appelli of exams and the commencement of the brief period before the next session of exams that many of my classmates would not be taking. I, myself had finished all of my career exams, and June marked a quick 2 weeks where I decided I could be a little adventurous and still be able to finish my thesis in time for a July 11 deadline. So, when Alonos and Giulia asked if I wanted to head to Reggio-Emilia (Giulia's hometown), and hike La Pietra di Bismantova, I said "Come no!?" 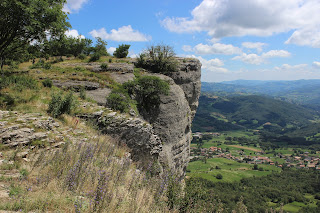 Alonso and I got a semi-early start, early for him! We met at la stazione centrale around 9:00am to take the regionale train to Reggio Emilia where Giulia was waiting for us with her car. The train ride was pretty quick, and we found Giulia easily as we excited the train and headed towards the parking lot where she indicated she would be waiting.

First stop: Il Panificio. We couldn't hike the Pietra di Bizmantova without a little nutrience in our backpacks and in our bodies. Giulia drove us to a Panificio near the center of Reggio-Emilia and the train station. She suggested we try this spinach filled pie, typical of the area, known as Erbazzone.  This delicious pie is made of dough, spinach or collard green filling, garlic, onion, parmigiano-reggiano and tiny pieces of lardello (layer of fat, prosciutto bits). Delicious to say the least. 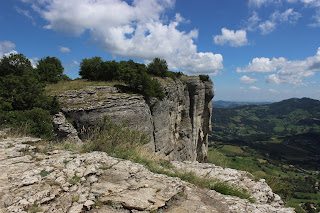 With erbazzone in our backpacks, we were off towards the Appenines of Reggio-Emilia.

Giulia drove well and explained the sights and the various roads as we headed toward the mountains. We passed the apartment complex where she lives as we exited the city center, she commutes back and forth from there to get to class everyday. City turned into rolling hills and green fields quickly. The windy road brought us through hills and valleys, weaving between small towns every so often. I wasn't quite sure how long the drive to the hike was supposed to be, nor did I know what to expect but as we got closer, about a half hour out, Giulia pointed out a flat plateau-like feature that rose steeply out of the rolling geography. THAT, she explained, was the destination. We could see the destination for most of the hour ride, but as we neared closer and closer, the plateau shaped geographic form grew even more impressive.

The landscape was beautiful. Rolling hills carved out by the road we traveled on, small towns sporadically placed, and green, lush fields engulfed our car. The green hills gave way to the impressionable Pietra di Bismantova, a steep rock face that jutted out of the hills and was capped with another lovely blanket of green grass and wild flowers, what a treat! But as we near, I also grew weary... how on earth was I going to climb the steep rock face? There was no way the three of us were getting up there easily! Rest assured, Giulia was sure the hike would be an easy 40 minutes and that there were no difficult parts of the climb... I wasn't going to believe her until we arrived at the top! 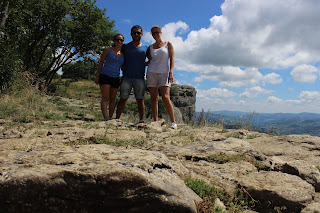 We drove up the base of the rock formation, driving farther up than I had anticipate -- already a good sign for my legs. We emptied from the car and started heading up towards the beginning of the path where there were bathrooms, a small tourist shop and a a restaurant. The first leg up to that point was pretty steep, but manageable and no rock climbing attire proved necessary, so my nerves had already settled.  We made our way through the woods to find a path that Giulia assured us would take us zig zagging around the rock instead of straight up. In good fiducia we followed her. The hike was beautiful, curving around the rock wall at a slight incline and opening up to a grassy field almost at the top. Giulia pointed out a path straight up the vertical rock face where two people were getting geared up to climb up utilizing the anchors that you could see staggered all the way up the face of the cliff. Who the heck put those there!?  This discovery sparked a conversation on rock climbing vocabulary, that seemed very difficult, and writing this now I see why it was so difficult. I had to google what those metal hooks they put into the rock to figure out what they were called in English, no wonder describing them in Italian was no breeze! The difficult part was that there wasn't just a single type of anchor used to rock climb and scale mountains like the one we were staring up at. I couldn't name the various types of anchors in English and I hard a hard time describing them in Italian and Giulia and Alonso also struggled to come up with the right set of vocabulary for the rock climbing word. Whatever words we did establish that described the anchors clearly did not stick, since I now cannot remember the vocabulary set! I'll have to do a little wordreference-ing ;) 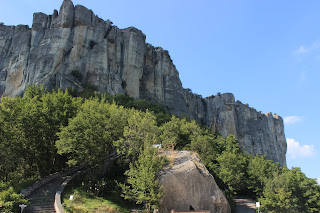 A few key vocabulary words you should know before you go climbing in Italy:

So after tackling rock climbing vocabulary proved to be more difficult than continuing on our way up the mountain the easy way, we decided to proceed with a loss for words. The climb was quick, steep at parts, but mostly painless since it was only a total of 40 minutes up the mountain. At the top of the path we approcahed a clearing and a dramatic view. We had reached the flat top of the immense plateau of La Pietra di Bizmantova and man, oh man, it was impressive! Just as we had seen the rock stick out of the rolling geography on our drive up, we could now see the surrounding hills and valleys below us and the winding roads weaving between them, with that I pictured myself standing on top of that massive rock! 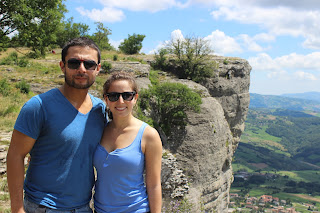 There were a few trees and tall grass that covered the top of the plateau and the terrain was quite rocky underneath, hence the name, Pietra. We walked near the perimeter and looked straight down at the steep drop off and massive rock wall that some crazies climb straight up. We found a flat area near some shade that wasn't directly next to the drop off and we laid our picnic blankets/towels down to rest.  We sat on top of La Pietra di Bizmantova for a couple of hours, we chatted, ate our delicious erbazzone and soaked up the sun and the friendship, and I, the language. How lucky was I!? The trek down the hill proved to be much easier and quicker than our hike up, we stopped at the bottom for another snack, Alonso a smoke, and then Giulia drove us back to la stazione di Reggio-Emilia and Alonso and I were back to our beloved BO!