September 28, 2015
The fun wasn't over yet!  After waking up early to defend my thesis in Italian (what an accomplishment), running back and forth across Bologna to have the right cappuccinos and eat lunch, attend the graduation proclamation, climb the torre asinelli and celebrate with my friends and family at a lovely aperitivo at La Sartoria in Piazza Aldrovandi, we were pooped. Sleeping that night in 90 degree weather never felt so good. My emotions were all over the place, my family and loved onces had come to see me accomplish one of my greatest feats of my life and not even 24 hours later I had leave the city I grew to love and call home. It was a bittersweet affair, and luckily I had friends and family there to support me and whisk me off quickly like tearing a band-aid off. And I had the saving grace of returning for a few days to run the half marathon before I departed Italy with intention of establishing a job and life at home in Boston.

That also means I had to pack and move my apartment.

We were up and at 'em the next morning despite being dead tired. Toni perked the Moka and issues cappuccino's for all, for the last time on my tiny Via Solferino stove. I fortunately had packed up most of my small belongings and things that I had brought from home or purchased over my time there, the only thing left for those items was fitting them into the car. Further, I found out at the last minute that my landlord was going to be gutting the apartment and wouldn't use most of the kitchen items or anything else for that matter so that left us in the position to take what we wanted which would be especially useful since we'd have to furnish the house we had been renovating. The only problem that posed, was an issue of space that maybe the photo below can do a good job explaining without any extra explanation. 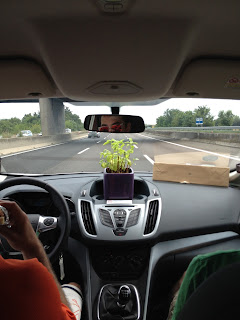 But, comunque, the other request from my landlord was that I remove the extra bed that had been purchased for the second bedroom. My options were to disassemble it and leave it on the side of the road, or disassemble it and give it to my good friend Alonso who had expressed interest in the bed. Since we D'Ambrosio/Serafinis do not waste, we opted to give the bed to Alonso if he promised to be at my apartment by 8:30am to help disassemble it and show my brother the way to his apartment to relocate it.  Surprinsgly, Alonso was prompt, but our disassembling methods were not. Three sweaty 15 minute round trips by foot to the hardware store happened in order to secure the Allen wrench that would fit the screw size on the Ikea bed. Alex seemed a little frustrated with the process, but Alonso was pretty happy to switch from a twin bed to a matrimoniale. After the mattress was safely in Alonso's apartment, Alex returned with the car and we began to load up the rest of my two years in Via Solferino. I was shocked with the amount of stuff that had accumulated, especially since I had begun sending things home with my parents whenever I had the chance. Since we also had a home to furnish that we were in the process of renovating (Zeppone) we also took the liberty to pack the car with kitchen things that my landlord had said was free game to take since he planned on renovating and moving into my apartment after I vacated it. Bittersweet day to say the least. By 10:00am we had the car packed with everything, including Mokas, espresso cups, pots & pans, chairs, suitcases and a basil plant. We were off to the Muto and just like that Bologna was no longer my home. That sentence literally hurt my heart to write! (Have missed it everyday since, even when I was there this August I missed it) So off to Muto squished between a chair, my aunt & Tim, sitting on top of layers of sheets and towels. What a drive! And the Nonni didn't have it any better. 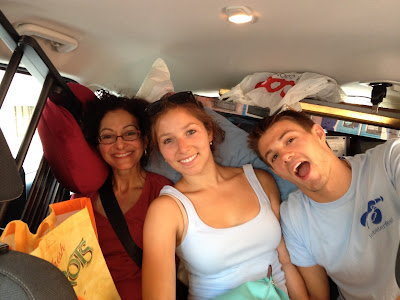 Nonna, Nonno, Mom, Dad, Marana, Alex, Michael, Tim, Toni and I shoved with my two years of life in Bologna into two tiny Italian rental cars to make the 6-7 hour drive home to Muto.  What a crazy and emotional couple of days in Bologna and what a perfect end to my Italian sojourn in Bologna. If I hadn't had everyone with me, I don't know if I could've ever left Via Solferino alone!
The best part was, I had the rest of the summer ahead of me to spend in Italy with the people I love. The adventure was no where near over and who am I kidding, Bologna was certainly already built into my future's plans!